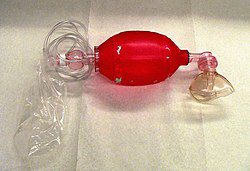 The BAVU, or manual resuscitator, is a medical device used to ventilate a person in the event of respiratory arrest. All emergency services must be equipped with it. Find out how BAVU is used to save lives.

What is a BAVU, or manual resuscitator?

A BAVU, or Self-Filling Balloon with One-Way Valve, also called a manual resuscitator, is a medical device used in emergencies to ventilate (deliver oxygen) to a person who is in respiratory arrest or has severe respiratory problems. It is preferably connected to a source of oxygen. BAVUs can be found in any ambulance, hospital or emergency department. The BAVU is just as vital as a defibrillator. The device is also sometimes called “AMBU”, in reference to the name of a famous brand. It can be single use or reusable.

The BAVU is generally made up of:

What is a BAVU used for?

The self-filling balloon with one-way valve is used to deliver oxygen to the airways of a patient in respiratory distress. It can also be used to unblock the airways (blood, vomiting, etc.). This is medical equipment intended for emergency responders and medical personnel in hospitals. In the most serious cases, it can supplement 100% of the oxygenation thanks to its reservoir tank. It is very easy to use and does not require any compressed gas, which guarantees optimal use in all circumstances.

More effective than mouth to mouth

Faced with cardiac arrest or breathing difficulties, the BAVU is much more effective than mouth to mouth and it is also more secure (thus avoiding any risk of contamination with the rescuer). It also improves the efficiency of cardiac and respiratory resuscitation and increases the chances of survival. It can be used in addition to a defibrillator (automatic or semi-automatic).

Its efficiency and ease of use make it one of the most widely used medical devices.

The BAVU can be used to save a victim of cardiopulmonary arrest in addition to cardiac massage but also to rescue a victim of drowning. A resuscitator with a suitable oxygen mask and proper use ensure rapid and effective action to save the life of the patient threatened with suffocation.

How is a BAVU used?

The BAVU is a manual tool that can be operated with two hands. The rescuer, turned and leaning towards the victim, applies pressure at a regular rate with one hand to deliver air into the airways and create oxygenation while he holds the mask on the nose with the other hand and the patient’s mouth to ensure a perfect seal.

Namely: in an oxygenation procedure, the rescuer uses the palm of his hand and his four fingers to oxygenate the patient. The thumb is not used in this operation. Between each pressure of air, the rescuer should check whether the victim’s chest is rising.

The oxygenation of a person with respiratory difficulty is done in 4 stages:

The BAVU is used before or after intubation, while waiting for a mechanical ventilator, in case of emergency transport of a person in cardiac arrest, while waiting for a resuscitation team. The correct tempo is 15 breaths per minute for adults and 20 to 30 breaths for babies or infants.

The BAVU must be used with both hands, in particular so that it is properly maintained on the mouth and nose. In the case of reusable BAVU, the equipment must be thoroughly disinfected (mask and valve included) after each use. If misused, BAVU can cause vomiting, pneumothorax, hyperventilation, etc. It is essential to master its use.

How to choose a BAVU?

The BAVU must be perfectly adapted to the patient’s morphology. A mask that is too large or too small can lead to many complications. Resuscitators therefore have masks of different sizes ranging from newborns to adults. They also adapt according to the build of the patient.

When purchasing, it should be ensured that the masks are compatible with the BAVU in stock.