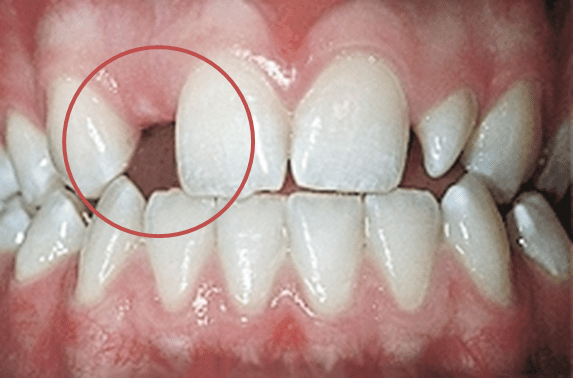 Most often of genetic origin, dental agenesis is characterized by the absence of formation of one or more teeth. More or less severe, it sometimes has significant functional and aesthetic repercussions, with significant psychological repercussions. The orthodontic check-up makes it possible to estimate whether dental appliances or implants may be of benefit.

What is dental agenesis?

Dental agenesis is characterized by the absence of one or more teeth, because they have not formed. This anomaly can affect baby teeth (children without teeth) but affects permanent teeth much more often.

There are moderate or severe forms of dental agenesis:

Dental agenesis is most often congenital. In the vast majority of cases, it is of genetic origin (hereditary genetic anomaly or sporadic appearance in the individual), but environmental factors are also likely to intervene.

Exposure of the fetus to certain environmental factors affects the formation of tooth germs. They can be physical agents (ionizing radiations) or chemical agents (drugs taken by the mother), but also maternal infectious diseases (syphilis, tuberculosis, rubella…).

The treatment of pediatric cancer by chemotherapy or by radiotherapy can be the cause of multiple agenesis, more or less severe depending on the age of the treatment and the doses administered.

Finally, significant craniofacial trauma can be responsible for dental agenesis.

The clinical examination and panoramic X-ray are the mainstays of the diagnosis. A retro-alveolar x-ray – the classic intraoral x-ray commonly performed in the dental office – is sometimes done.

Patients suffering from oligodontia are referred to a specialist consultation, which will offer them a complete diagnostic assessment and coordinate multidisciplinary care.

Indispensable in cases of oligodontia, the orthodontic assessment is based in particular on lateral teleradiography of the skull, on the cone beam (CBCT), a high-resolution radiography technique allowing digital 3D reconstructions, on exo- and intraoral photographs and on orthodontic casts.

Genetic counseling will help clarify whether or not oligodontia is syndromic and discuss heredity issues.

Dental agenesis is one of the most common dental abnormalities in humans, but in the vast majority of cases only one or two teeth are missing. Agenesis of wisdom teeth is the most common and affects up to 20 or even 30% of the population.

Oligondotia, on the other hand, is considered a rare disease (frequency less than 0,1% in various studies). The complete absence of teeth is

Overall, women are more frequently affected than men, but this trend seems to be reversed if we consider only the forms with the greatest number of missing teeth.

The frequency of agenesis as well as the type of missing teeth also vary according to the ethnic group. Thus, Caucasian-type Europeans are less likely tomore expensive than the Chinese.

In mild forms (hypodontia), wisdom teeth are most often missing. Lateral incisors and premolars are also likely to be absent.

In more severe forms (oligodontia), the canines, the first and second molars or the upper central incisors may also be concerned. When oligodontics concerns permanent teeth, milk teeth may persist beyond normal age.

Oligodontia can be accompanied by various abnormalities affecting other teeth and the jaw such as:

Dental agenesis is associated with cleft lip and palate in certain syndromes such as Van der Woude syndrome.

Oligodontia can also be associated with a deficit of salivary secretion, hair or nail abnormalities, sweat gland dysfunction, etc.

Multiple tooth agenesis can lead to insufficient growth of the jawbone (hypoplasia). Not stimulated by chewing, the bone tends to melt.

In addition, a bad occlusion (malocclusion) of the oral cavity can have serious functional repercussions. Affected children frequently suffer from chewing and swallowing disorders, which can lead to chronic digestive problems, with an impact on growth and health. Phonation is also affected, and language delays cannot be ruled out. Ventilation disturbances are sometimes present.

The consequences on the quality of life are not negligible. The aesthetic impact of multiple agenesis is often poorly experienced. As children grow older, they tend to isolate themselves and avoid laughing, smiling or eating in the presence of others. Without treatment, self-esteem and social life tend to deteriorate.

The treatment aims to preserve the remaining dental capital, to restore a good occlusion of the oral cavity and to improve aesthetics. Depending on the number and location of the missing teeth, rehabilitation may resort to prostheses or dental implants.

Orthodontic treatment makes it possible, if necessary, to modify the alignment and positioning of the remaining teeth. It can be used in particular to close the space between two teeth or on the contrary to enlarge it before replacement of the missing tooth.

Prosthetic rehabilitation can begin before the age of two. It uses removable partial dentures or fixed prostheses (veneers, crowns or bridges).

When feasible, dental implants offer a long-lasting solution. They often require a bone graft beforehand. The placement of 2 (or even 4) implants before the end of growth is possible only in the mandibular anterior region (lower jaw). Other types of implants are placed after growth has stopped.

The dentist may need to treat associated dental anomalies. Composite resins are used in particular to give the teeth a natural appearance.

The follow-up by a psychologist can be beneficial to help the child to overcome his difficulties.

There is no possibility of preventing dental agenesis. On the other hand, the protection of the remaining teeth is essential, especially if enamel defects put a high risk of decay, and oral hygiene education plays an essential role.