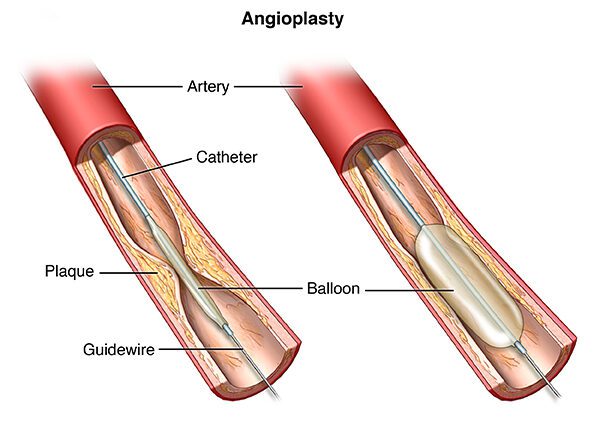 Developed in the 90s, stents are one of the great technical advances in cardiological and vascular surgery. These small metal springs, which prevent an artery from becoming blocked, now complete a large number of angioplasties, an intervention aimed at unblocking the arteries.

What is a stent?

The stent, also called an endocavitary prosthesis or endoprosthesis, is a medical device used in cardiology and vascular surgery. It is a small metal spring a few millimeters in diameter, and one or more centimeters long. Introduced into an artery, it allows, like a frame, to keep it open. The placement of a stent today accompanies the vast majority of transluminal arterial angioplasties (ATL).

Stents can be placed in different arteries:

Originally made from stainless steel, today there are stents made from polylactic acid, a fully biodegradable polymer that eventually gets absorbed into the artery wall. Another progress in recent years: so-called active stents. Coated with drugs that inhibit cell proliferation, these new generation stents reduce the risk of artery re-obstruction.

Ore Níos mó ar an ábhar:  Leukemia: what is it?

How is the placement of a stent?

The stent is placed during an angioplasty, under local anesthesia. Angioplasty involves inserting a small probe into an artery, either at the fold of the groin (femoral artery) or at the wrist (radial artery) depending on the stenosed area. The catheter is gradually brought to the diseased artery, where a small balloon is inflated at the level of the narrowed area in order to crush the atheromatous plaque which clogs the artery. A contrast product injected beforehand makes it possible to clearly identify the target area.

The stent is then placed in order to keep the artery open once the balloon is removed.

When to place a stent?

In atherosclerosis, an atherosclerotic plaque forms inside the coronary arteries, the two arteries supplying the heart. With the narrowing of the arteries, blood flow is reduced and the heart is less supplied and oxygenated, which increases the risk of angina pectoris (angina) or myocardial infarction. To “unclog” the arteries, different solutions exist:

The technique is chosen according to the general state of health of the patient, his history of coronary insufficiency, the size of the vessel and the number of coronary arteries involved, the location of the blocked coronary artery, the ease of access to obstruction, etc.

At the level of the leg

Atheromatous plaques can also form in the arteries of the lower extremities, at the iliac artery or the femoral artery, and affect blood circulation. This is called obstructive arteritis of the lower limbs (PAD), manifested by different symptoms depending on its degree, the ultimate risk being gangrene and amputation. When PAD is symptomatic and disabling despite medical treatment, or in the event of signs of ischemia (resting pain, skin lesions), dilation with, if necessary, placement of a stent, may be considered.

At the level of the carotid

Atheromatous deposits can also form in the internal carotid artery, an artery located in the neck and ascending to the brain to provide it with oxygen. These deposits can lead to severe stenosis of the internal carotid artery, responsible for 10 to 20% of ischemic strokes (stroke) or one of transient ischemic attacks (TIA). When revascularization of the area is deemed necessary based on the symptoms and degree of aortic stenosis, surgery remains the first line of treatment. In rare cases, a carotid angioplasty with placement of a stent is performed.

After placement of a stent

A follow-up Doppler ultrasound is performed before discharge or during the first month to check the patency of the stent.

The anti-platelet treatment combining aspirin and clopidogrel is maintained for several months, or even longer if it is an active stent. Then, aspirin alone is prescribed for the long term.

Depending on the nature of the angioplasty with a stent station (coronary artery, carotid), the patient will be monitored regularly by his specialist, with various examinations. Thus, 3 to 6 months after coronary angioplasty, a stress test is performed to check cardiac function. It is then recommended every year.

Angioplasty and stenting have cleared the artery, but they do not treat the cause of the obstruction, atherosclerosis. After the operation, it is therefore essential to adopt a better lifestyle: healthier eating habits, regular physical activity, smoking cessation, weight control, high blood pressure and diabetes.